The Panasonic GF6 is the least expensive compact system camera (CSC) in the range, but it looks considerably more upmarket than the Panasonic Lumix DMC-GF5 that it replaces. There's a mode dial on top, which demonstrates that this is more than just a point-and-shoot camera. The 3in touchscreen can tilt up, down and flip right over for self-portraits. It's a little wider and deeper than the GF5, but the extra space makes it a more comfortable fit in large hands. 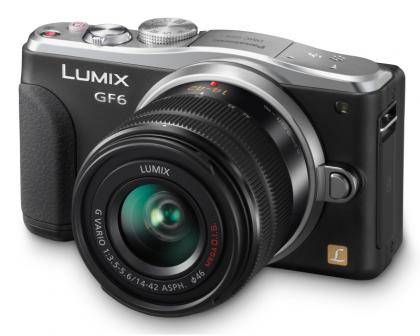 The silver top-plate looks much classier than the GF5's rounded plastic design, but it's actually just silver-effect plastic. The pop-up flash is unchanged, with the ability to tilt it upwards to bounce light off the ceiling – great for avoiding harsh flash-lit portraits. There's no option to attach an more powerful external flashgun, though.

The GF5 came with a slim, motorised 14-42mm lens (part code H-PS14042E), but the GF6 is bundled with a more conventional 14-42mm lens (H-FS1442A). While this newly designed lens isn't as small the motorised lens, it's much smaller and lighter than the one that's bundled with the Panasonic G6 . It's a bit confusing having three Panasonic lenses all with the same optical specifications, but this one is our favourite. It's small enough to be a good match for the petite GF6, and we prefer its lens rings for zoom and focus to the levers on the motorised model. It also helps to keep the cost of the GF6 down (the motorised lens is quite pricey). 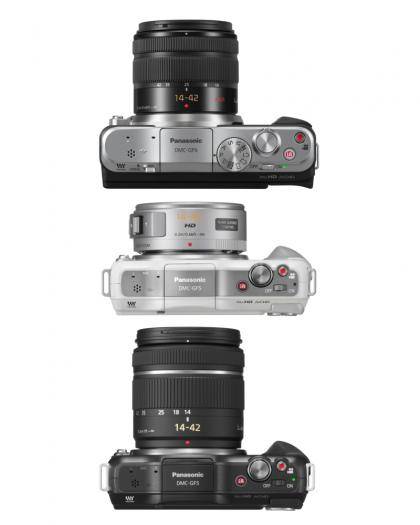 The GF6 and its new kit lens (top) sits between the two kit lens options for the GF5 in terms of size, but it's not as expensive as the slim, motorised lens and we prefer its conventional lens rings

We spent two weeks shooting with the GF6 alongside the Olympus E-PM2, Sony NEX-3N and Nikon S1 – all entry-level models in their respective CSC ranges. The GF6 was easily the most rewarding to use. The articulated screen meant we could shoot at waist height and brace our elbows to our sides for stability. 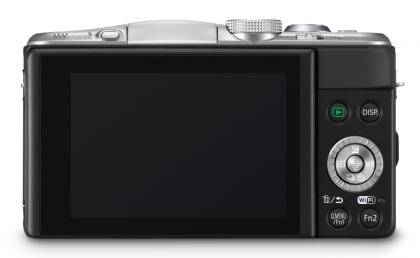 The Panasonic's touchscreen made autofocus point selection and menu navigation a breeze, and the Q.Menu gave quick access to all the most important settings. There's a dial on the back for adjusting values, and the lever that encircles the shutter button can be assigned to aperture, exposure compensation or zoom (when a motorised zoom lens is attached). With the wheel adjusting the shutter speed or aperture, the lever assigned to exposure compensation and the touchscreen handling autofocus, this is a surprisingly hands-on camera for keen photographers.

The tilting touchscreen is a great addition

It's the only one of the four with a dedicated mode dial, although this is overridden by the iA button, which puts the camera into fully automatic mode. It's a handy shortcut, but having an iA position on the mode dial would have made more sense. The iA button is illuminated to show when it's selected but it's not easy to see in direct sunlight.

The other three cameras have kit lenses that collapse down when not in use, so the GF6 is the largest of the three when in transit. There's not much in it, though, and because the GF6's lens is always ready to shoot, there was no fiddling around when trying to capture a shot in a hurry. The GF6 was also the fastest performer of the four in normal use, capturing a photo every 0.5 seconds for both JPEGs and raw. Continuous mode ran at 4.2fps for 29 JPEGs or nine raw shots before slowing to the speed of the card.

The GF6 comes top for video capture, too. There's a choice of 25p, 50i or 50p recording at 1080p, and details were crisp and natural. It exhibited the lowest noise in dimly lit scenes, and the touchscreen allowed straightforward control over the autofocus, including subject tracking. Full manual exposure control is included for video, and there are modes for creating stop-motion animations and time-lapse videos.

Here we video quality, outdoors and indoors, between the four current budget CSCs. Click through to YouTube and view at 1080p for 1:1 pixel comparisons