Acer's latest laptops have adopted a new, slimline design and the 7741 is no exception. The smart, textured lid opens to reveal a brushed-metal keyboard surround, without any of the gaudy LEDs and touch-sensitive controls of previous designs. It's not all about the looks, though: inside is a powerful Core i3 330M processor, and the 17.3in screen is generous for the price. 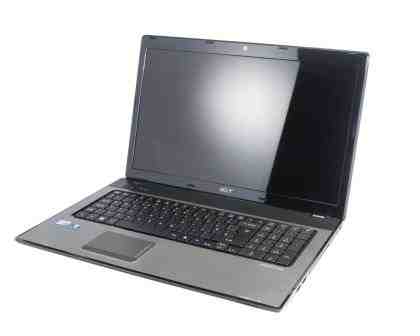 It has a 1,600x900 resolution, which isn't enough to display Full HD content pixel-for-pixel but is still larger than the 1,366x768 you'll find on most laptops at this price. It has a bright, even backlight, and the glossy finish helps to add vibrancy to colours. Colour accuracy was also good, and contrast excellent, although tight vertical viewing angles means you have to adjust the tilt of the screen carefully. In our side-by-side tests, only Packard Bell's LM86 matched it for image quality.

There's no dedicated graphics card, but the Core i3 330M's built-in graphics processor can handle HD content, and you could use the HDMI output to watch Full HD content on a larger external screen. It can't handle games however, apart from the most basic casual variety. However, while we've seen great battery performance from other Core i3-equipped notebooks, the 7741's battery life of three hours and 12 minutes is a bit disappointing. Although you won't want to lug the 3.3kg 7741 around with you for very long, there are larger laptops on test this month that lasted longer.

A score of 75 overall in our benchmarks is more in line with expectations, and means the Aspire is suitably powerful for most applications. Although the Core i3 doesn't support Turbo Boost, we still saw a higher score in the single-threaded Image-editing test. The drop in the scores for multi-threaded applications isn't dramatic, however, so you won't find things slowing down too much if you open more than one application.

The large screen means there's enough room for a numeric keyboard - with four columns of keys - without compromising on the layout of the main keyboard. There's a large, double-height Enter key, but the left Shift key is a bit narrow. The keys have flat tops, so you get little positional feedback, but the action is light and firm: we made few mistakes when typing this review on it. Similarly, the large touchpad is responsive, and has a vertical scrolling area. Below it is a see-saw button with a light action, as long as you press at either extremity to avoid the dead spot in the centre.

The large screen and decent performance make the Aspire 7741 a tempting choice, although you can get laptops with slightly larger hard disks for the money.