While Canon often refreshes PIXMA models without making major changes, the MG5450 is quite a new design. It's stylish and very low-slung, rising less than 15cm from the desk. To make this low height possible the scanner bed is fixed in place; you access the ink cartridges by raising the cantilevered control panel.

It's beautifully engineered, but we have our reservations; the shallow access means you have to insert the rear of each tank by feel, and we found ourselves wondering how we'd clear a paper jam if one happened deep in the printer's bowels. 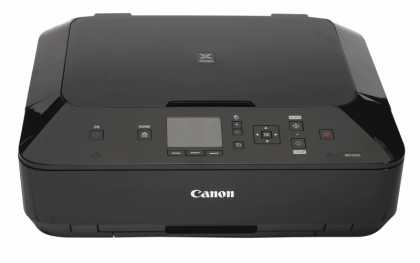 This printer uses a five-ink setup comprising a pigment black tank for bold prints on plain paper, and dye-based black, cyan, magenta and yellow inks for high-quality photos. For the first time Canon has introduced high-capacity versions of this style of tank, which does help to lower running costs to 7.9p per page. While acceptable, however, this is hardly cheap; the more basic Canon PIXMA MG3250 undercuts the MG5450 by nearly 1.5p per page.

This printer has a colour screen with three dedicated selection buttons below, combined with a separate four-way navigation controller and selection button. We're not a great fan of this system, in which the two sets of buttons never seem to work together intuitively. 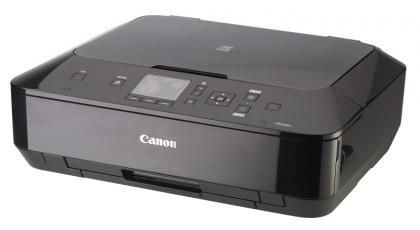 The MG5450 seemed unhappy with the congested wireless environment in which we performed our wireless printing tests. By switching the router's wireless channel we managed to double the speed of a 1,200dpi photo scan from taking six minutes down to just over three, but over USB the sample test took just a minute and 21 seconds, and all other scans were swift. Several other MFP scanners also seemed affected to a lesser degree, illustrating that in a typical environment high-resolution scans can still be slow over a wireless network. 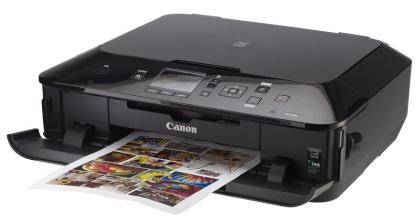 Print speeds were adequate in our tests, peaking at an impressive 13.2ppm when printing black text at the Normal setting. Strangely, the Fast mode proved more than 2ppm slower, making it useless unless you want to save money on ink; text printed using it was far lighter, but still very readable. Our mixed colour text appeared at a modest 2.6ppm, but the quality was very high. 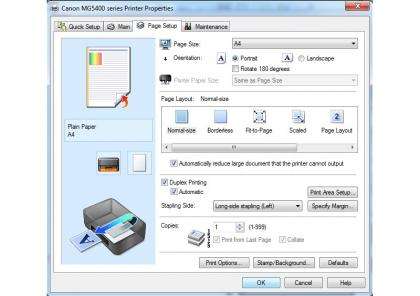 This printer's high 9,600x2,400dpi resolution and small one-picolitre ink droplet size promise good photos, and the results were indeed strong, with a characteristic sharpness and good shade control that helped reproduce detail that gets lost by less accomplished photo printers. Scans were similarly good, with above-average sharpness and colour accuracy. Working together, the scanner and printer delivered high-quality photocopies very quickly, with a colour copy taking only 20 seconds and black copies 11 seconds.

This is a good multifunction printer, with useful features, good results and a welcome dash of style. However, we've some minor gripes about its controls, and its wireless performance was fairly slow; we think the Canon MG6350 is worth the extra cash.