Epson's Expression Home XP-102 is one of the cheapest MFPs you can buy. Accordingly, it's rather basic; there's no fax, the scanner is limited to a modest 600x1,200dpi resolution and Epson claims only a 6.2ipm maximum print speed in mono, and half that in colour. There's no support for wired or wireless networking, and the printer misses out on a fancy colour screen and associated features such as direct photo printing. 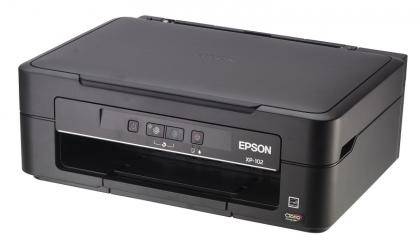 Basic doesn't necessarily mean bad, however, and the XP-102 certainly doesn't feel cheap. The single paper input tray at the rear folds shut when not in use to prevent dust getting into the mechanism, and there's a small guard to prevent objects placed on the scanner lid rolling into the paper feed at other times, which could prove useful. The scanner lid itself is thin and flexible and its hinges allow only a millimetre or two of give for thick originals, but otherwise this MFP seems tough and functional.

The XP-105 takes cartridges from Epson's new Claria Home range and, unusually for an entry-level printer, they're available in regular and XL versions that are good for 470 pages (black) and 450 pages for each colour (up from 180 for the standard versions). Using the XL cartridges gives a cost per page of 9.6p, which is not unreasonable for such a cheap device, but Canon's similar PIXMA MP230 manages an even lower 8.5p. You fit the Epson's cartridges by tilting up the scanner bed, which is propped up by a plastic stay that's a little fiddly to release. There's only a single ink status light on the printer itself, so when a cartridge needs replacing you need the PC driver to tell you which one it is. 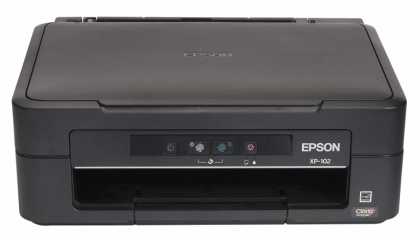 We don't expect miracles from budget MFPs, but even so the XP-102 was disappointing in our tests. Its draft text speed of nearly 15ppm would be impressive if the results hadn't been so faint and blocky that they were near useless. At the default print quality the MFP was as slow as Epson's figures suggest, reaching 6ppm, and while the results were dark enough they still suffered from a sketchy outline, clearly visible to those with sharp eyes. At 1.6ppm colour prints were very slow, and again the results were a little sketchy. We could also see a couple of faint vertical lines running through large graphics. 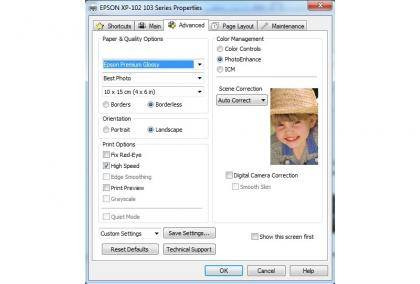 The XP-102 offers borderless 6x4in photos, but can't do the same for A4 prints

Unfortunately these lines were also visible in photo prints. The prints also exhibited more grain than we'd prefer, but otherwise they weren't bad for a budget printer, with accurate colours and sharp details. Borderless photo prints are possible up to 6x4in, but not on A4. The XP-102 has a remarkably quiet scanner that's swift when operating within its modest optical resolution. The results weren't as sharp and detailed as we tend to expect from Epson scanners, but they were a match for other budget devices. Sadly, photocopies weren't so impressive, with our colour page taking on a wan, sickly tinge, and all copies appearing a little fuzzy. 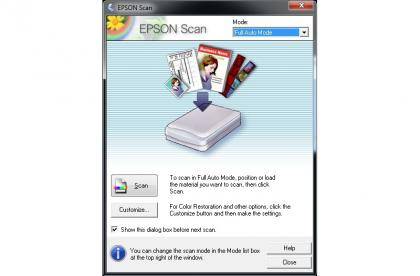 With the Full Auto mode it's possible to load original documents and scan them with a single click...

...but for those who want it, Professional mode offers more features and excellent usability

With such lacklustre results, we can't recommend the XP-102. Although the Canon PIXMA MP230 doesn't allow any borderless printing, it's otherwise comprehensively better, and is slightly cheaper to buy and run.