Since returning to the UK laptop market in 2020 after an absence of six years, Samsung has had hit after hit. Although its latest machines don’t yet have the heavyweight reputation of some big rivals, its experience in the highly competitive smartphone market is clearly paying dividends – and the new Samsung Galaxy Book Pro is further evidence that it knows exactly what it’s doing.

Offering a range of 13.3in and 15.6in laptops with 11th-Gen Intel Core i5 and i7 processors in both conventional laptop and 360-degree “convertible” forms, and all with Intel’s Evo certification, the Samsung Galaxy Book Pro might just be the best laptop we’ve seen in in 2021. 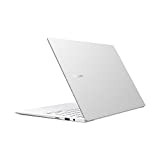 Samsung Galaxy Book Pro review: What you need to know

The Galaxy Book Pro range is available in 13.3in and 15.6in sizes, both with AMOLED displays, which is normally an indicator that you’ll pay a healthy premium. However, prices are pretty reasonable, with the smaller model starting at a price of £1,099 (Intel Core i5-1135G7, 8GB RAM, 512GB storage) and the 15.6in version of this costing £1,199.

READ NEXT: The best speakers to buy

When it comes to the closest competition, my favourite is the Razer Book 13 . Granted, it’s only available with a 13.4in screen and, at £1,680 for the Core i7 non-touchscreen model, it’s hardly what you’d call cheap. However, it’s compact, solid, handsome and very capable.

The Dell XPS 13 is a perennial favourite, with tip-top build quality that belies its 1.2kg weight, although the screen measures the same 13.4in as the Razer. Some may find having only two Type-C ports rather limiting but, at the time of writing, the version with a UHD touchscreen was on offer for £1,109 , which is excellent value. 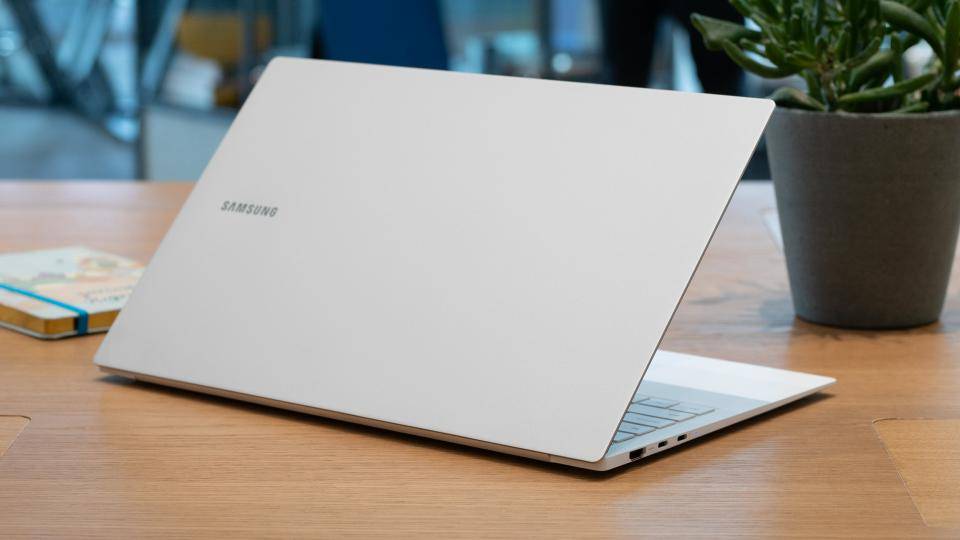 Huawei’s MateBook X Pro has just had a refresh and now offers the latest Core i7 silicon. It has a 13.9in display and weighs 1.33kg, but the daft position of the webcam is a design gaffe that’s hard to overlook. The £1,599 asking price brings a 1TB SSD to the party.

And the weight is the very first thing you notice about the Galaxy Book Pro. It’s incredibly light: 1.05kg is nothing for a 15.6in notebook. It’s even lighter than the 16in LG Gram, which weighs an already featherweight 1.16kg.

I’ve no idea how Samsung has managed this. Maybe the battery and some of the other heavy components are in a parallel dimension and so don’t register on the scales.

Either way, it’s the lightest big-screen laptop on the market and, considering how slim and compact it is – it measures 355 x 226 x 11.7mm – it’s surprisingly stiff and solid as well. Yes, the lid has some flex to it, but no more than many other thin laptops. More importantly, the Galaxy Book Pro has been MIL-STD-810G-standard tested, so it will survive exposure to rain, sand, dust and gunfire vibration, among other things.

You also might be forgiven for thinking that you can’t change the internal components. Not so. Remove the four rubber feet and undo the screws they conceal and you can unclip the bottom panel and add an M.2 2280 PCI-E SSD. You can also swap out the 512GB 2230 SSD should you wish. Everything else is fixed in place.

I also applaud Samsung’s decision to fit a Type-A USB (3.2 Gen 1, 5Gbits/sec spec) port, proving once and for all that other manufacturers omit them by choice rather than due to a genuine lack of space. Space has also been found for a full-sized HDMI port, two Type-C ports, one of which supports Thunderbolt 4, a 3.5mm audio jack and a microSD card slot. That’s impressive for a machine this skinny.

With so little space to play with, it came as no surprise that the keyboard has a rather shallow action. On the plus side, it’s very positive and quiet and a genuine pleasure to type on, and the fingerprint scanner built into the power button works equally well. The keyboard has a three-level backlight, complete with an ambient sensor that can adjust the backlight brightness automatically.

Below the keyboard sits a large 130 x 90mm trackpad, and I can’t think of a bad thing to say about that, either. The finish, the action, the size and position are all nigh-on perfect.

If you’re invested in Samsung’s Galaxy mobile and home ecosystems, the Galaxy Book Pro has lots more to offer. For example, you can use the Galaxy Tab S7 and S7+ Android tablets as a second screen, control devices linked to a Samsung SmartThings account or share files between your Galaxy phone and laptop using Samsung’s SmartShare.

All told, the Galaxy Book Pro has more than a dozen Samsung apps baked-in and fewer than half can be uninstalled. Whether or not you regard them as necessary or even useful – other than Samsung Settings, which I’ll come to shortly – or as bloat is up to you.

READ NEXT: The best laptops for video editing

As soon as you lay eyes on the Galaxy Book Pro’s sumptuous AMOLED display, you know you’re looking at something a little out of the ordinary.

It’s only a 1,920 x 1,080 141dpi 60Hz panel, so it lacks the sharpness you find on laptops with 1440p or 4K screens. It isn’t the brightest laptop screen you’ll ever see, either. It maxes out at 308cd/m², which means you may struggle if you’re using it outdoors in bright sunlight, especially as the finish is glossy rather than matte.

However, elsewhere it performs brilliantly. Since it’s an AMOLED panel, the contrast ratio is effectively perfect. Delta E colour accuracy in sRGB is an impressive 1.39 as well, although the display itself is capable of reproducing much more than plain old sRGB, delivering 113.8% of the DCI-P3 and 110.7% of the Adobe RGB colour gamuts.

Open up the Samsung Settings app and you’ll find the option to switch between a selection of colour profiles: Vivid (AMOLED native) for gaming, Natural (sRGB) for web browsing and general use, Photo editing (Adobe RGB) and Movie (DCI-P3).

There’s also an Auto mode that swaps the profile to match certain Samsung and Windows 10 applications. Alas, this last profile doesn’t support third-party apps so it doesn’t recognise VLC as requiring DCI-P3 or Steam as requiring Vivid for games.

The one thing missing from all this is touch, but that’s not essential on a non-2-in-1 laptop like this.

The audio output, although not quite in the same league as the screen, is good, too. Dolby Atmos-certified AKG speakers fire out of two grilles in the base near the front corners and, despite the space limitations, they deliver plenty of volume, no distortion at all and even a fair amount of bass.

The Galaxy Book Pro I have on review is built around the quad-core 2.4GHz Core i7 1165G7 processor with integrated Xe graphics and 16GB of LPDDR4x (soldered) RAM.

Unsurprisingly, it performs much like every other system that uses the same underpinnings. Compared with the Razer Book 13 and Huawei MateBook Pro we tested recently, the benchmark scores are slightly higher, although not by enough to be noticeable in day-to-day use.

The Samsung Settings app lets you tweak performance, too, depending on your needs. You can set the fans to permanently off (No Fan), which is handy if you’re working in a library or other quiet environment. The Optimised mode is normal Windows, and then there’s Silent. Counterintuitively, this mode doesn’t completely disable the fan but instead uses the microphone to adjust the fan speed in accordance with ambient noise.

Lastly, there’s High Performance mode, which lets the fans run free and throws any thermal throttling protocols out of the window. We conducted our tests in High-Performance mode and our battery rundown test in Optimised mode.

In our bespoke 4K media benchmark, the Samsung scored 126 points to the Razer’s 124 and the Huawei’s 118. The Razer has a very effective cooling system, as you’d expect from a company that majors in building high-end gaming laptops, but in High-Performance mode the Samsung Galaxy Book Pro does just that wee bit better.

The Galaxy Book Pro also performed well in our gaming tests. Dirt: Showdown returned a score of 83.8fps (720p) and Metro: Last Light Redux 58.7fps (1080p). Both those figures are better than the Razer Book 13, the previous Core i7 1165G7-with-Xe-graphics champ.

Leave the Galaxy Book Pro in Optimised mode and the fan does fire up quite often but, at middling speed, it’s not intrusively loud. Only once did the fan start to run at what I take to be top speed, when a BIOS update was being installed.

Battery life is as impressive as performance, with our video rundown test draining the battery in 16hrs 28mins. The only laptop we’ve tested recently here at Expert Reviews that has done better is the M1 Apple MacBook Pro 13, which reached 17hrs 31mins before the lights went out.

READ NEXT: The best gaming laptops to buy

What’s not to like about the Galaxy Book Pro? It’s as light as a feather, so slender it almost vanishes when looked at side-on, has a superb display, a solid array of ports, a good keyboard, a massive trackpad, excellent performance and good battery life.

I’d rather Samsung’s marketing suits hadn’t insisted that you can only have a touchscreen on the 360 models and an LTE modem only in the 13.3in machine, but I suppose they have their reasons. And considering how good the rest of the package is – and how reasonable the price is – it seems churlish to complain.

Will it sell like the Galaxy S21? Probably not; it’s only a laptop, after all. However, it’s so good that it deserves to. It’s officially our favourite Windows laptop of 2021.