While the Acer Aspire S5 was undoubtedly the star of Acer’s pre-CES press conference today, we were also pleased to see the Timeline brand continued in this Ultrabook. We’ve long respected the Aspire Timeline range, with it winning many awards over the last couple of years. 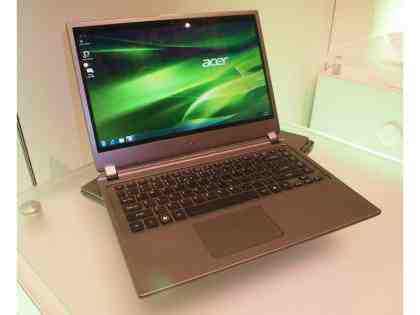 The new Ultrabook version is slimmer and lighter (obviously), but apparently maintains the full-working day battery life of eight hours. It’s also the first Ultrabook we’ve seen to have a built-in DVD writer, a real boon for those who still like to install software from disc, watch DVDs on the move, or make backups to removable media. Yes an external drive is fine for some of these tasks, but if you’re on the go all the time then it becomes a chore to carry ‘just in case’. Unfortunately it's a tray-loading drive rather than a neater slot-loading type.

The optical drive and larger battery means this isn’t the slimmest Ultrabook yet, measuring 20mm. That extra width makes it very sturdy though, and there’s plenty of space on the rear for ports. Two USB3 ports are a welcome step up from many Ultrabook's single such port, plus there's HDMI and network connectors.

The keyboard is very reminiscent of Apple's MacBook pro efforts, so no problems there. Beneath it is a large touchpad with no buttons, which clicks down in its entirety, again very Apple-esque. 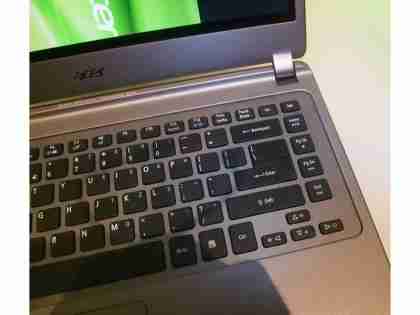 With no fancy features and no announcement yet on pricing and specifications there’s little more to say about the Aspire Timeline Ultra, but despite this it’s the kind of practical and hopefully affordable Ultrabook that we like. We look forward to seeing it for a full review when it’s released in Q1 of 2012.