That may sound too good to be true, and it certainly comes with a hefty price tag, but what’s the laptop like to use in reality? Is the Zephyrus simply too expensive or does it justify its price tag?

Asus ROG Zephyrus review: What you need to know

The Asus ROG Zephyrus is a 15.6in laptop that features a Max-Q GTX 1080 graphics card. At only 17.8mm thick, it’s extremely thin for a laptop of its prowess and delivers the sort of performance that – a few years ago – was unimaginable in a portable laptop.

It’s the first laptop we’ve seen to fit Nvidia’s Max-Q requirements, so it’s stupidly thin and surprisingly quiet, but Asus’ laptop fails to keep the heat down to a minimum. It isn’t perfect, but if you’re looking for a serious gaming laptop that does it all, the Zephyrus is one of finest machines we’ve ever seen. 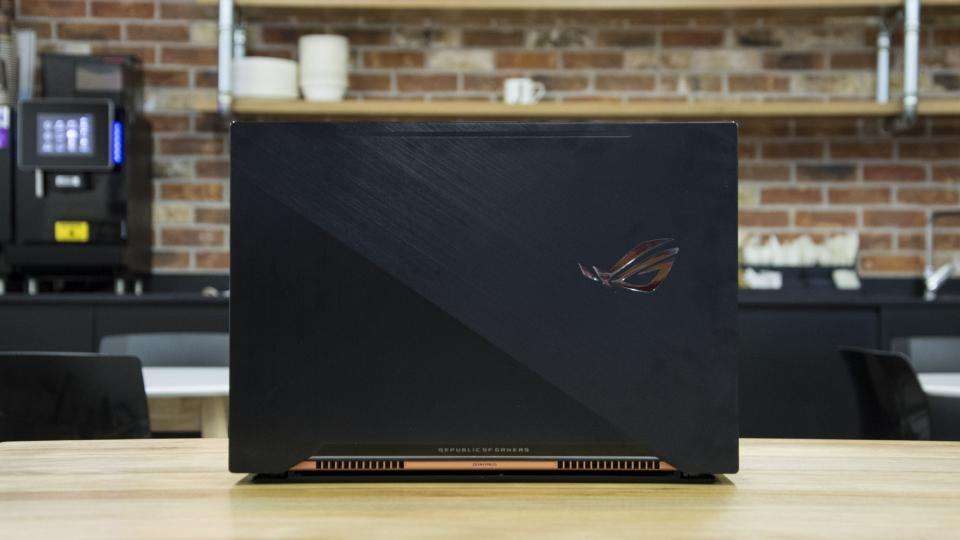 There’s not much competition for that sort of specification, at least not in the UK. The closest we’ve got is the £3,400 Acer Predator Triton 700 , which we’ll be reviewing soon, has the same specs (including a 120Hz screen) but is slightly thicker at 18.9mm thick.

Take away the Max-Q requirements and there’s a wider selection of laptops to choose from, such as the £1,899 Gigabyte Aero 15 and the 14in £2,000 Razer Blade , both of which have a lower-end GTX 1060 GPU, a Full HD 60Hz display and the same Intel Core processor as the Zephyrus.

From afar, the Zephyrus is a head-turner. It measures a mere 17.9mm thick, weighs 2.2kg, and its svelte frame and angular, brushed-metal chassis look gorgeous.

As you open the Zephyrus’ lid, you’ll first notice the odd placement of the keyboard and trackpad. The former is flush with the front of the laptop and, with no wrist rest to house it, the touchpad sits to the right-hand side. 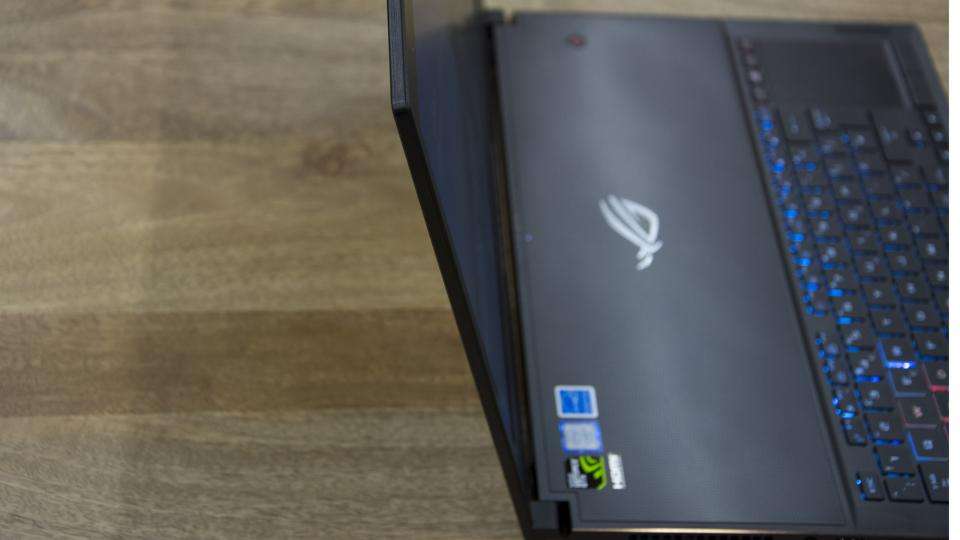 That’s not the only strange thing about the design of this machine. If you look to the side as you open the lid, you’ll see a plastic plate extends, making it look as if the laptop is broken. It’s not, though – in fact, this ingenious bit of design provides the laptop more room to dissipate heat. A red light shines from the sides, too, but only when you’re plugged in.

At first, I disliked the design, particularly the forward placement of the keyboard and the small, square-ish trackpad to the right. But, as I used the laptop I found the positioning more and more intuitive.

The trackpad positioning replicates the position of a mouse and if you tap the trackpad/calculator button above the trackpad, it’ll replace the trackpad with a touch-based number pad. If you’re worried about your wrist position, Asus provides a rubber wrist rest and an RGB Asus ROG Strix Impact mouse in the box with the Zephyrus.

Elsewhere, there are two front-facing stereo 2W speakers situated on either side of the keyboard. These provide respectable-enough sound quality but they don’t give the audio much of a spread. In comparison to a MacBook Pro, I found them a little quiet and they don’t provide the enveloping sound, either.

And, as for connectivity, the Zephyrus has four USB 3.0 ports, a HDMI 2.0 video output, a Type-C USB 3.1 Gen 2 Thunderbolt port and a 3.5mm headphone/mic jack. For wireless, there’s integrated 802.11ac (2x2 MIMO) Wi-Fi and Bluetooth 4.1. Asus also provides a USB to Ethernet adapter in the box, which is essential for low-latency gaming. You can upgrade the RAM and storage by opening the laptop, but it's no simple task .

READ NEXT: The very best laptops

The star of the show, though, is the display. It’s a 15.6in Full HD (1,920 x 1,080) IPS panel that runs at a super-smooth 120Hz and, to add the cherry on top, features Nvidia’s G-Sync technology. For gaming, the panel is fantastic: the 120Hz display is more fluid than any other laptop you’ll ever see and Nvidia’s G-Sync technology eliminates screen tearing. The screen’s IPS display lends onscreen images plenty of presence as well, with a highly respectable contrast ratio of 1,253:1.

However, it misses the mark in a few key areas: it isn’t particularly colour accurate at an average Delta E of 3.16 and its 307cd/m ² peak brightness is rather dull. These won’t pose a potent threat for gamers using it in most indoor situations, but if you do a lot of Photoshop work, it’s certainly something to be aware of.

This translates to a silky-smooth gaming experience. In the Expert Reviews 4K benchmarks, the Zephyrus achieved an impressive score of 130. In the multi-platform Geekbench 4 benchmark, it scored 4,531 in single-core and 14,791 in multi-core tests, all of which means you can throw absolutely anything at the laptop and have it run without problems. These benchmark results are near-identical to its closest rival, the Acer Predator Triton.

Put into perspective for competitive gamers, playing Counter-Strike: Global Offensive (CS:GO) with everything maxed out at 1080p renders at around 300fps.

Unplugged from the mains the laptop it’s fast, but not quite so blistering, with performance throttled to save on battery life. Simply unplugging it from the mains drops the framerate in CS:GO from 300fps down to 120fps. That’s not unusual in gaming laptops but it is something to be aware of if you’re planning on using the laptop to game on your travels.

Last, but not least, to storage and the 512GB PCIe Gen3 x4 M.2 SSD. It’s blisteringly quick thanks to the wider bandwidth on Gen3 x4. Put through its paces in AS SSD benchmark, the drive returns 2,393MB/sec read and 1,564MB/sec write speeds. That’s much quicker than the Dell Inspiron 15 7000’s Gen3 SSD that achieves 479MB/sec and 387MB/sec respectively.

This leads me to battery life, which isn’t nearly as great. In fact, in the Expert Reviews video test, the ROG lasted a mere 2hrs 30mins of playback. That’s unsurprising, given the sheer amount of power at hand but still poor in comparison to other gaming-centric laptops, such as the Razer Blade.

To receive Nvidia’s Max-Q certification, laptops have to remain quiet and at least here the Zephyrus works well. It has two fans that dissipate heat from the side and rear and they do their job admirably. The laptop stays relatively quiet under heavy load; the flipside is that in keeping things so quiet, the cooling suffers somewhat. The processor cores reach 95°C and the GPU hits 75°C when gaming and running benchmarks for half an hour – that’s awfully hot.

The Zephyrus is undeniably beautiful to look at and unprecedentedly powerful for such a thin and lightweight laptop. It’s far from perfect, with its short battery life, dull display and limited performance on-battery, and these detract from the initial thrill.

Despite this, from what you can find on the market today, I’d recommend it if you’re after the very best portable gaming laptop that combines both style and power in a portable shell. If I was given £2,800 to spend, though, I’d buy a cheap convertible laptop for portable use and a desktop PC with a monitor at home.