For years, financial bigwigs have criticized cryptocurrencies such as Bitcoin, while often lauding its underlying blockchain technology. 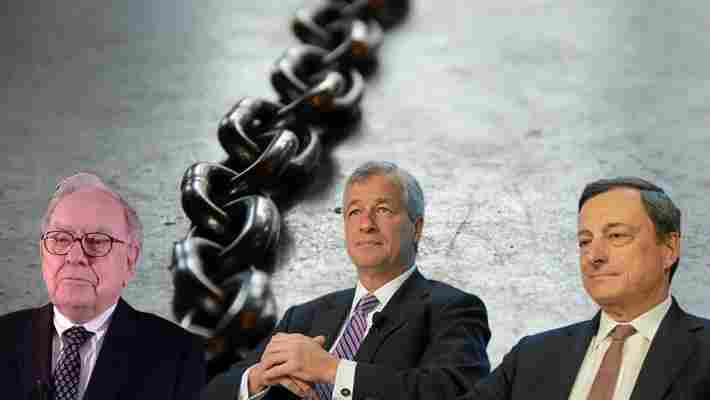 At times, their negative comments about cryptocurrency have been followed by their institution’s active interest in decentralized ledger technology – with some going as far as filing cryptocurrency-related patents and launching blockchain-based pilots .

With this in mind, we decided to take a look at some of the comments made by prominent heads of financial institutions to try and get a better idea on where they stand on the topic of cryptocurrencies and blockchain technology.

First up, business magnate Warren Buffett, who made headlines this week after saying Bitcoin was a delusion.

Speaking to CNBC’s Becky Quick , the billionaire chairman and CEO of investment conglomerate Berkshire Hathaway, said: “…blockchain is important but Bitcoin has no unique value at all.”

“It doesn’t produce anything, you can stare at it all day and no little Bitcoins come out or anything like that,” Buffett added.

Buffett’s latest comments about Bitcoin won’t come as a surprise to die-hard cryptocurrency enthusiasts, as he initially dismissed the digital currency as early as 2014.

At the time, Buffett told investors to avoid the cryptocurrency and referred to it as “ rat poison squared .”

Despite Buffett’s personal opinion on Bitcoin, BNSF Railway Co – a unit within the Berkshire Hathaway conglomerate – in 2017 announced it had become the first major US railroad to join the Blockchain in Transport Alliance, a group tasked with finding out how best to apply cryptocurrencies and decentralized ledger tech in the transport industry.

American business executive and billionaire Jamie Dimon has long been dismissive of Bitcoin.

Back in 2015, Dimon shed doubt on Bitcoin’s potential for long-term survival.

Speaking at the Fortune Global Forum, he said people were wasting their time with digital currencies such as Bitcoin, adding:

Some two years later, in September 2017, Dimon called Bitcoin a fraud, but backpedaled on his criticism somewhat in January the following year, saying he regretted his comments.

Although critical of Bitcoin, Dimon did say he thought blockchain was real during the same interview with Fox Business, but highlighted he was still concerned about “how governments are going to feel about Bitcoin when it gets really big.”

JPMorgan Chase, the company Dimon is chairman and CEO of, recently announced plans to launch a new digital asset, which many said was a cryptocurrency (but, it’s not) .

Portuguese economist Vitor Manuel Constancio served as the vice president of the European Central Bank (ECB) from June 2010 until May last year.

In December 2016, news surfaced that the ECB was exploring the use of distributed ledger technology alongside Japan’s central bank. It also created an internal task force focused on the technology.

Then, in September 2017, Constancio said : “Bitcoin is a sort of tulip. It’s indeed an instrument of speculation for those that want to bet on something that can go up and down 50 or 40 percent in a few days but certainly not a currency, and certainly, we don’t see it as a threat to central banking or monetary policy, that’s for sure.”

Italian economist Mario Draghi served as the president of the ECB since 2011 and has previously said it’s not the institution’s job to regulate cryptocurrencies.

Draghi made the comments as part of the #AskDraghi video series ran by the ECB, saying: “It’s not the ECB’s responsibility to do that.”

During the clip, Draghi said he would think “carefully” prior to purchasing Bitcoin, nothing he didn’t perceive to be a currency. “While the euro’s value is stable,” he added, “the value of Bitcoin oscillates wildly.”

Draghi also blasted Bitcoin’s decentralized nature. “The euro is backed by the European Central Bank. The dollar is backed by the Federal Reserve. Currencies are backed by central banks or their governments. Nobody backs Bitcoin.”

This, however, was not the first time Draghi commented on the lack of regulation in the cryptocurrency space. Back in September 2017, he said the ECB had  “ no power ” to regulate Bitcoin and the following November Draghi went on to say cryptocurrencies had a limited impact on the world’s economy.

More recently, Draghi debunked rumors that the ECB was looking to issue a digital currency. In a letter sent to Mr. Jonás Fernández, a member of the European Parliament, Draghi confirmed the central bank was analyzing the consequences of issuing a Central Bank Digital Currency but explained why there were no plans to launch one.

Last but not least, Bank of America’s chief executive officer Brian Moynihan, said : “There ought to be a hard look at the policy of anonymous currencies, because the ability to track information of money flowing is one of we use seriously against terrorism and as a [tool] against improper, illegal behavior.”

Moynihan’s comments couldn’t be more explicit, yet they seem quite jarring considering Bank of America was, at one point, the bank with the most blockchain patents .

Its first blockchain-related patent was submitted in March 2014 and published by the US Patent and Trademark Office over a year later, in September 2015. The patent application didn’t include the word blockchain, but it depicted a system where funds were sent between accounts by leveraging cryptocurrencies’ underlying technology.

Then, in March 2016, the Bank of America, a member of R3’s blockchain consortium, revealed it was working to create a blockchain-based trial centered on trade finance.

It’s perfectly plausible for individuals to weigh in on the cryptocurrency debate, and while their personal opinions don’t always align with that of the companies they lead or represent, it’s not surprising these businesses are keenly exploring the potential of a technology which has so far promised to maximize efficiency and deliver better returns.

Bitcoin, on the other hand, have long suffered from a branding problem , with many critics set on diminishing its long-term potential based on the fact that it’s used to fund ilicit activity.

With this in mind, will mainstream finance continue to be enamored with blockchain technology in detriment of Bitcoin? I think so – the fear of missing out on the next wave of innovation is real, but so is the angst about a competitor having a better bottom line.

Scam ICO advertised on CoinMarketCap busted by police in India

Cryptocurrency scams that have been running for years in India are finally getting busted by the local police.

The company’s founder Hardik Zadafiya has been arrested for cheating and criminal breach of trust under the Indian Penal Code (IPC), but the other four accused are on the run, local publication Times of India (TOI) reported today.

The police acted on the basis of a first information report (FIR) filed by a local resident. The victim claimed to have been duped of $230,000 by Bitstrades. The police suspects the scam could have run a lot larger, but no other victims have yet came forward.

According to the FIR, the accused took 190 investors on tours to Bangkok and Singapore to gain their trust. The police suspects many of these investors could have been duped by Bitstrades, but are hesitating to come forward.

“[The] majority of investors who lost money in the racket are yet to come forward. We hope that following the registration of the complaint, they will provide details of cheating about the accused to [the crime department],” an investigating officer told TOI.

The discovery of Bitstrades as a pyramid scheme has highlighted the lack of due diligence in the cryptocurrency industry.

The scam ICO was being advertised on the home page of popular cryptocurrency market tracker CoinMarketCap’s website in January 2018, as an archived version shows. As of press time, CoinMarketCap also follows Bitstrades on Twitter.

It’s not just CoinMarketCap, Bitstrades also managed to place sponsored articles on a number of cryptocurrency news sites including newsBTC , The Merkle , and CoinSpeaker.

With scams running rampant in the industry, it’s imperative that the reputed players in the industry watch out for protecting their audience from being defrauded. But, that doesn’t seem to be the case for most of these companies.

It’s not as if there weren’t enough clues about Bitstrades being anything but scam. A Youtube channel called ‘CryptoXposed’ can be seen warning viewers that Bitstrades shows all signs of being a scam just like the infamous BitConnect , in a video dated January 26, 2018.

If an individual YouTuber can tell a fraud ICO apart from a genuine one — these major players with all their resources should be able to do it too. 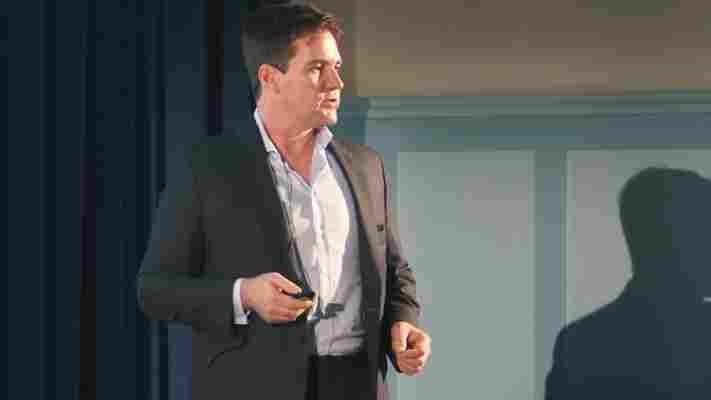 The case was thrown out of court on grounds that it was “weak,” “lacking in detail,” and “inappropriate.”

High Court Judge Sir Matthew Nicklin said there was little evidence to support Craig Wright ‘s claims of damage to his reputation, and highlighted that Wright had failed to provide enough evidence of “the global reputation he enjoys and, more particularly, the extent to which it has been damaged.”

The judge’s decision , which surfaced today, brands the case as a form of “libel tourism,” a term used to refer to opportunistic cases seeking to get damages in plaintiff-friendly jurisdictions.

Wright handed Ver a legal notice when he was in the UK earlier this year, alleging that a video he made describing him as a fraud damaged his reputation. Ver lives in Japan and was only in the UK for a brief visit, leading the judge to argue that the UK may have not been the most appropriate place to launch the case in.

Wright’s spokesperson told Decrypt that the Ver case had “only been thrown out because of the jurisdiction, not the content .”

Wright, who is seemingly building a patent empire , is notorious in the world of cryptocurrency and blockchain.

In December 2015, two simultaneous investigations by Wired and Gizmodo claimed he could have invented Bitcoin . However, subsequent reporting raised concerns that the Australian computer scientist could potentially be involved in an elaborate scam .

To date, Wright has filed several suits against well-known figures in the cryptocurrency industry, including Ethereum ‘s Vitalik Buterin . Wright is facing legal action in the state of Florida, accused of swindling $5 billion dollars worth of Bitcoin from the late Dave Kleiman, his ex-business partner.