Gigabyte has filled the gap in its range of high-end Aorus gaming laptops, revealing its brand-new 15.6in X5 laptop at CES. The X5 fits between the 17.3in X7 and the 13.9in X3 and X3 Plus . The announcement has also revealed the existence of Nvidia's long-awaited mid-range 900M-series laptop graphics chips; the X5 is powered by two GeForce GTX 965M chips running in SLI.

The 965M has yet to be officially announced by Nvidia, although software updates rolled out last year hinted at its existence. Until now, though, its performance has remained a mystery.

Gigabyte says that a pair of 965Ms in SLI are 15 per cent more powerful than a single top-end 980M, using figures from tests conducted in 3DMark 11 (where it scored P12000) to back up its claims.

The two chips will fit into a 15.6in chassis that's just 22.9mm thick with the power, Gigabyte says, to play games at the laptop's native 4K (3,840x2,160 pixels) resolution. The screen uses IGZO technology, the benefits of which include both better power efficiency and a higher pixel density. The X5 uses Aorus' distinctive metal design with its aggressive chevron-style vents and an aggressively creased lid to set it apart from other brands.

The X5 will be available in the second quarter of 2015 and will be priced at $2,299 (estimated £1,816 inc VAT) for the base model and $2,799 (estimated £2,212 inc VAT) for a top-end model. Further specifications including processors and storage have yet to be announced. Top-end Aorus models typically have two or three high-capacity SSDs in RAID and high-end Intel Core i7 mobile processors, so we'd expect the most expensive X5s to follow suit.

Gigabyte also announced an updated 13.9in Aorus X3 Plus with Nvidia's 6GB GeForce GTX 970M on board; previous models had 870M chips.

Elsewhere, the company announced updated editions of its Gigabyte-branded P37-, P35- and P34-series laptops, all of which now use 900M-series Nvidia graphics chips. Full details and US pricing can be found below. UK Pricing has not yet been announced. 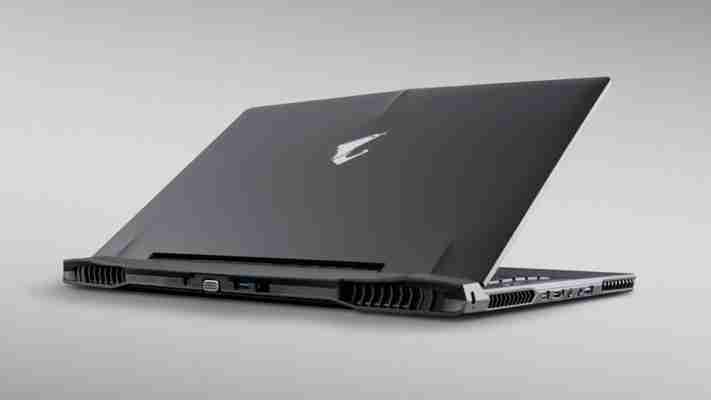