HP seems to be covering all bases with the new dv7 range. Not content with just releasing an Intel-powered model, the company is also targeting more budget-conscious users with a cheaper version equipped with an AMD processor.

First impressions were positive thanks to HP’s excellent design; the metallic chassis looks fantastic, with curves in all the right places. Build quality is a little questionable around the edges where different materials join, but otherwise it felt reassuringly sturdy. It’s not exactly lightweight at 3.4kg, particularly when you add the weight of the mains charger, but its compact dimensions mean it should still slip into a laptop bag. 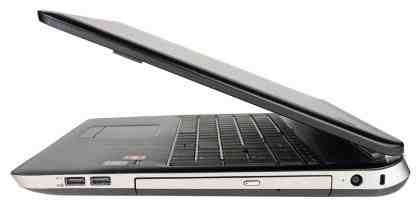 Recent HP laptops had terrible touchpads that were a nightmare to use, but thankfully the dv7's has had a much-needed redesign. Gone are the touch-sensitive buttons that would cause jittery movement and accidental mouse clicks, replaced with physical buttons that have plenty of spring and short travel. The touchpad itself now feels much more accurate as a result. A novel illuminated surround makes it easier to use in the dark, but we would have liked a backlit keyboard as well. 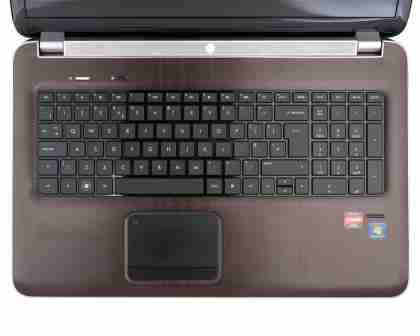 The keyboard is something of a mixed bag. The function keys default to their pre-assigned shortcuts, which can initially seem confusing, and each QWERTY key has slightly too much travel, but enough spring that we didn’t have any major issues when typing.

We were pleased to see that the 17.3in widescreen display has a decent resolution. Although it isn’t Full HD, 1,600x900 is ideal for working on two documents side-by-side, browsing the web or watching 720p video. Brightness was reasonable, but colours were muted. It’s a shame that viewing angles were incredibly limited, as there’s a huge amount of screen tilt, but contrast quickly disappears at anything but a face-on angle. The reflective glossy screen finish doesn’t help either.