Capcom’s Versus series was once very popular in arcades, so it came as no surprise following the major success of Street Fighter IV when the company announced a new version. Marvel Vs. Capcom 3: Fate of Two Worlds is the sequel fans have been desperate to see for the last ten years, but can it possibly live up to their expectations.

First things first; the frantic action and screen-filling ultra moves we’ve come to expect from the Versus series are all present and correct, as is the large roster of characters. Although there aren’t as many as the previous game, there’s still a very respectable 32 playable characters, plus several others to unlock.

Fan favourites from Street Fighter, Darkstalkers, X-men and Avengers make an appearance, as do some new characters that have never been playable before. Resident Evil star Chris Redfield, Arthur the Knight from Ghouls N Ghosts and Mega Man sidekick Zero are just a few of the highlights. The roster looks set to grow in the future, as Capcom has already announced two additional characters that will be available to download as downloadable content in March. A vote on the game’s forum is also in full swing, with the winning characters to be added at a later date. 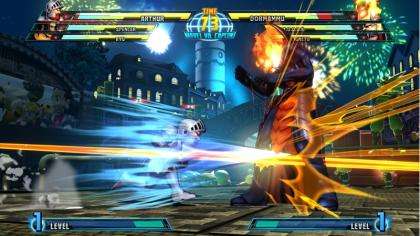 Every character has their own distinct set of moves that are easy to pick up but devilishly difficult to master. As well as regular and special moves, immensely powerful ultra-moves fill the screen with projectiles and have the power to instantly reverse the flow of a match. Our favourite comes from Marvel's tongue-in-cheek Deadpool, who tears the health bar from the top of screen and batters his opponent with it.

Matches still take the form of three-vs-three bouts, with fast-hitting special moves and gravity-defying air combos, but there have been some major gameplay changes and tweaks from the previous game. Combos are much easier to pull off and timing is nowhere near as strict, which should make the game far more accessible for anyone unfamiliar with the series. “X-factor” is another new introduction; usable once per match, it temporarily boosts both attack and defence, lasting longer when you’re down to your last character. In the right hands, it can turn a battle around from the verge of defeat. 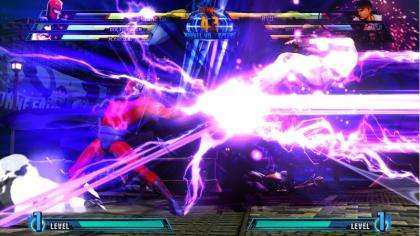 With super-fast action and screen-filling special effects, MVC3 might look impenetrable for anyone not familiar with fighting games, but the training missions and one-button mode ensure that players new to the franchise aren’t overwhelmed. However, even with these assists turned on, the speed and sheer number of projectiles on-screen at once requires quick reflexes.