Con artists will try anything to make their schemes appear legitimate to unwitting victims. In a recent email doing the rounds to financial advisors, scammers have been impersonating the UK‘s Financial Conduct Authority (FCA) luring victims into a trap with Bitcoin. 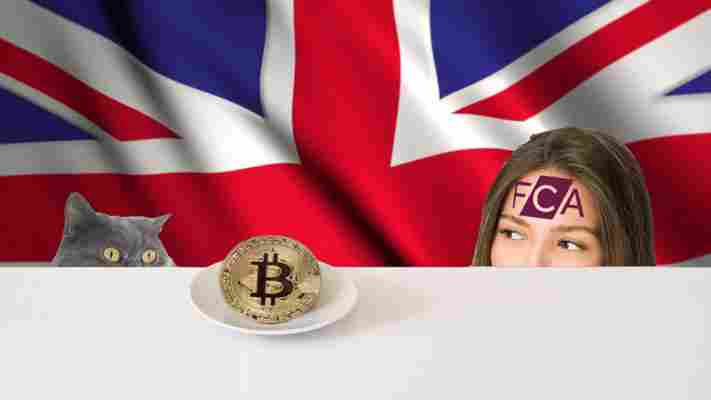 The illegitimate communication had a subject line that read “Guaranteed chance to earn,” followed by a paragraph of text that suggested Bitcoin is set to rise in value over the next 12 months.

“Bitcoin is still a long way off its peak price of $20,000, which it reached in 2017, but some cryptocurrency experts believe it could hit an even higher value by 2020,” the email reportedly reads.

Recipients are then encouraged to click a “call to action” button also made up to feature the FCA‘s branding. The FCA confirmed that it did not send the email.

It seems the FT was made aware of the email after an independent financial advisor took to Twitter this week having received the scam communication five times last weekend. The advisor said to the FT that he believes the email is a virus.

“The correspondence is likely to be linked to organized fraud and we strongly advise you not to respond to the criminals in any way,” the FCA said to the FT.

As the FT notes, misleading and illegitimate emails claiming to be from or endorsed by regulatory bodies like the FCA are nothing new.

You can always double-check whether the firm in question is regulated by cross-referencing the FCA‘s Financial Services Register found here . If the company emailing you isn’t listed, it’s best to steer clear.

Back in May, the FCA reported that Brits lost a total of $34 million to cryptocurrency scams last year, an average of $18,500 per victim.

There is no mention of how successful this latest email con has been. But I’d like to think independent financial advisors have the nous to know a fake when they see one, especially one that pretends to be from the FCA.

Moonday Mornings: IBM wants to put your browser history on the blockchain, forever

Welcome to another Moonday Mornings. Let’s waste no time and take a look at the weekend’s cryptocurrency and blockchain headlines you can’t afford to miss.

2. Over the past financial year, – April 1, 2018 to March 31, 2019 – Canada’s anti-money laundering watchdog sent 61 cryptocurrency-related incidents to relevant law enforcement agencies, according to The Globe and Mail . This is more than three times the number of cases it sent in the previous year. Industry experts expect this number to explode over the next 12 months when the watchdog begins examining the operations of virtual currency exchanges.

3. After a five-year wait, China’s central bank digital currency is said to be “ready,” The Block reports . A senior official from the country’s central bank announced that it would roll out its digital currency “soon.” According to the announcement, the prototype coin exists and has “fully adopted the blockchain architecture.” That said, the digital currency won’t rely entirely on a “pure blockchain” as it wouldn’t provide the transaction speed required for the coin to be used for retail payments.

4. Cryptocurrency exchange Binance has teased what digital assets might be added to its US targeted platform. A blog post from the company’s US CEO outlined the 30 tokens being considered. Leading coins such as Bitcoin, XRP, Ethereum, Bitcoin Cash, and Litecoin are mentioned, along with the exchange’s own token Binance Coin .

5. Blockchain patent whore IBM has filed yet another patent (spotted by CoinDesk ), this time for a blockhain-based web browser – whatever that means. According to the patent, the browser gathers information from sessions which is transferred to a peer-to-peer network for “collection and storage.” The type of data gathered depends on the type of browsing session. Data gathered whilst browsing at work will differ to data gathered when browsing at home.

While IBM says its browser will put privacy in the hands of the individual, I don’t buy it. If there’s one place I don’t want my web history, it’s on a public ledger, where all can see, forever. Not that I have anything to hide, obviously…

There’s a monumental shift planned for the second largest cryptocurrency by market cap. Ethereum is edging closer to its new consensus algorithm , which promises to fix the platform’s scalability and transaction throughput bottlenecks – but a new industry report claims it might not work. 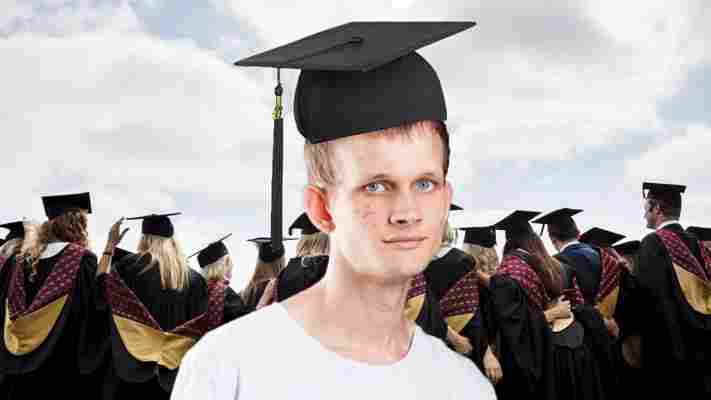 Currently, Ethereum is much like Bitcoin in that anyone can join the network by simply contributing computing power to ensure transactions are legit ( Proof-of-Work ).

But its developers have been gearing up to revamp how the network selects and rewards those who keep the blockchain trustworthy and secure.

Ethereum holders will instead be able to use the weight of their balances to vote on passing or refusing transactions (Proof-of-Stake). If validators attempt to game the system by being dishonest, they will lose all of their tokens as punishment.

This is considered more energy efficient than Bitcoin’s Proof-of-Work, and proponents of this consensus style would say it’s more “egalitarian.”

In light of this, boutique digital asset research firm Delphi Digital picked apart Ethereum‘s proposal with an extensive investigation. It has been shared directly with Hard Fork, so let’s dive in to find the major takeaways.

There are no more token sales to generate profit

The success of the new Ethereum boils down to correctly incentivizing holders to lock up their cryptocurrency, essentially using its value as clout for validating transactons. This process is called “staking.”

But getting cryptocurrency fans to “store” their digital value in order to keep the network chugging along healthily is just a small part of the picture.

Initial coin offerings (ICOs) are a thing because startups with Ethereum-based tokens need to sustain themselves. Being token creators, these businesses usually keep a substantial percentage to sell to retail investors through cryptocurrency exchanges.

There is an entire ecosystem of blockchain startups who have deployed platforms that feature cryptocurrency as a central component. To survive the bear market, the companies behind these products have been selling their own digital assets to pay for development upkeep – and it hasn’t always worked .

In 2019, token sales (ICOs) are pretty much pass é . Delphi Digital researchers noted that the number of new token sales had “cooled off” considerably in the second half of 2018, and says their disappearance has led to a lack of fundamental buying pressure in Ethereum‘s markets.

More generally, as there are considerably fewer Ethereum-based ICOs to buy, retail investors have less incentive to purchase Ether, as participating in ICOs is really a primary use-case for the cryptocurrency.

This effect has been amplified by existing projects selling the Ethereum raised to fund their development efforts, which Delphi researchers consider a big contributing factor to its overall price decline. 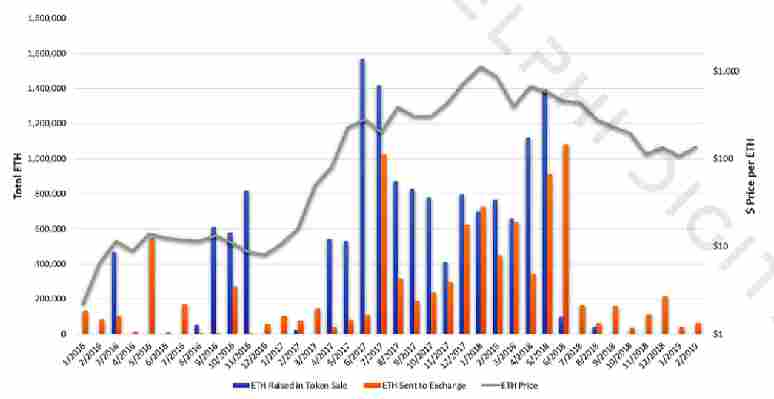 Delphi analyzed 54 of the largest token sales in ICO history (from 2016 to now), strictly using data that could be verified on-chain.

It found that a total of 16.25M ETH was raised, of which 9.66M ETH had been already been siphoned off to standard cryptocurrency exchanges.

At the current value, this amounts to $1.3 billion, but at the height of the cryptocurrency market 9.66M ETH was worth over $13 billion.

The researchers highlighted a tipping point, when the amount of Ethereum being liquidated on exchanges significantly dwarfed any new inflows through token sales – June 2018. This period also marked the beginning of an epic 76-percent decline in the price of ETH.

There are other market pressures with potential for stifling the price of Ethereum. One is the procession of software updates required to make the Proof-of-Stake transition smoothly and securely. These are called forks , and come in two kinds: soft, and hard.

Generally, forks lead to market selloffs. The largest price drop came after the “Homestead” fork in March 2016, when ETH’s price fell over 35 percent from $12.50 to $8 by mid-April.

“The most recent hard fork prior to last week’s, Byzantium, resulted in a significantly smaller 30-day loss (less than 1 percent), which may be attributed to the reduction in block rewards (5 ETH to 3), and the hysteria surrounding crypto-assets in Q4 2017,” reported Delphi.

On average, ETH declines roughly 8 percent in the week following hard forks. With the latest upgrade, Constantinople, ETH’s post-fork performance pretty-well tracked its historical average, dropping 6 percent. It has since rebounded to similar levels just before the fork.

Delphi Digital also voiced misgivings about viability of the current Ethereum roadmap, specifically in terms of how rewards for participating in the network are structured.

“One of our biggest concerns for Ethereum’s long-term viability is the net yield for validators. Using the currently proposed model, after taking into account staking costs we believe the yield for validators risks being too low to gain mass appeal,” Delphi explained. “Annual yields, denominated in ETH, below 3-4 percent may deter those capable of securing the network from doing so given the risk-return tradeoff of other investment opportunities.”

Delphi Digital stressed to Hard Fork that the “deposit process” proposed to Ethereum holders to allow them to participate in the network is a one-way transaction. This means that once the user deposits their tokens and is credited with the equivalent amount of ETH to use for staking purposes, they will not be able to “withdraw their funds” until the second phase of the consensus switch.

“This essentially means that participating as an early validator locks up your funds for around two years, which could be risky,” noted Delphi’s spokesperson.

Sentiment is turning positive, despite no more ICO hype

All these challenges exist at a time when market sentiment for Ethereum has actually turned positive. Delphi’s analysis found that Ethereum‘s presence in the community zeitgeist has been heavily tied to ICO interest, but that’s changing.

“ICO tweet volume has been trending downward for a majority of the last 12 months,” declared Delphi. “Conversely, a more bullish sign for ETH in the near-term is that sentiment on Ethereum is now experiencing its most prolonged period of positivity since 2017.”

This is definitely something to consider. Adjacent research cited by Delphi found that average daily sentiment score is a “very strong indicator” of Ethereum price movement, and this historically does wonders for its market cap.

Still, Delphi Digital warns that Ethereum‘s framework for its Proof-of-Stake proposal, in its current form, might not work out as its development team might hope.

“W hat we’re suggesting is that the planned economics they have in place may not be lucrative enough to incentivize users to stake their ETH to help secure the network,” Delphi told Hard Fork.

“The variety of scenarios we’ve shown [in our report] make it clear that the currently proposed yield [for validating transactions] will likely be insufficient,” it continued. “While it’s plausible to assume that certain stakers, like [Ethereum co-founder Vitalik Buterin], will stake regardless of the economics, we do not believe this is the most reliable path to long term sustainability.”

Delphi Digital laid out a proposal for an alternative structure to properly incentivize cryptocurrency fans to keep the network secure (hint: higher network fees!) in the report, which is now public and viewable here .